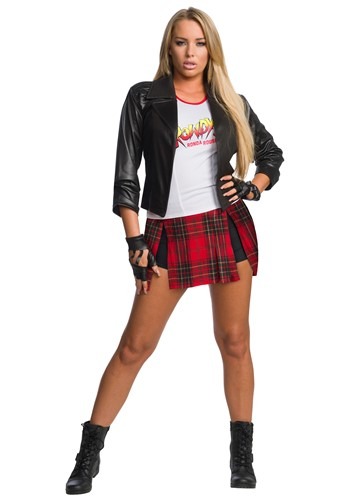 Time for the Finishing Move

Don't mess with Ronda. Some unfortunate wrestlers in the WWE have tried. It's just a bad idea! She knows basically every judo move there is to know and she's not shy about using those moves to absolutely decimate her opponents in the ring. If you don't believe us, just ask Stephanie McMahon how it feels to be on the receiving end of a standing reverse kata guruma! She's one tough girl and she doesn't take

If you want to cultivate a tough look like Ronda, then you need this Rowdy Ronda Rousey Costume! It's officially licensed from the WWE!

This Ronda Rousey costume comes with everything you need to feel ring-ready! It starts with a white top that has Rowdy Ronda Rousey's name printed on the front. Of course, it uses that Rowdy Rodder Piper font as an homage to the legendary old-school wrestler. The shirt also has red accents around the neck. The black jacket is made out of a black faux leather material and slips on over the white shirt. The boy shorts are a pair of basic black shorts and fit underneath the included plaid kilt, which is also a nod to the late and great Roddy Piper! The costume also sports a pair of black, fingerless gloves, so you can finish off the look with a tough look that's bound to have any opponent thinking twice about taking you on in the ring!

If you're a fan of Ronda, or if you just want to create a look that's fierce enough for the ring, then this Ronda Rousey costume is just what you need. Be sure to check out the rest of our WWE costumes to get a whole group of wrestlers ready for your next costume party!