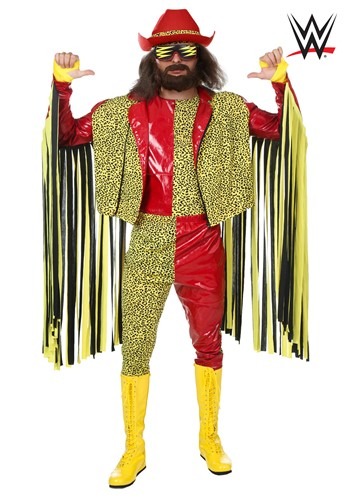 Are you ready to be the best of the best of World Wrestling Entertainment? Do you want to be the biggest, meanest wrestler out there? How 'bout it? Yeah? Now, we're talking the best of the best, here. No blonde dude with a long mustache. No mysterious masked wrestlers or ones who resort to shovels. We mean the cream of the crop. A wrestler too hot to handle and too cold to hold. And what would that make you? The Macho Man, Randy Savage of course.

So, some may argue whether he's the best of the best, but he's definitely one of the top contenders. That throaty growl? All that Pomp and Circumstance? This man has flair and personality to match his killer wrestling moves. As such, he's definitely one of the best wrestlers out there... but there is one thing that puts him over the top for us. You have to know what we're talking about. Matching his colorful style is going to be the biggest challenge of your life. But, we can help.

You could commit your life to matching Randy the Macho Man Savage, or you could just put on this Macho Man costume and soar your way to victory. This bright PVC outfit is red and leopard printed. There's pants, a pullover top, jacket, and felt cowboy hat in the same bright red with leopard print band. There's also crazy long fringe from his arms. Just don't be surprised if, when you put this on, Macho Man Madness ensues.

You've got quite a bit work to do if you want to fill the obnoxious colored shirts of Mr. Savage here. You'll need to hulk up. Grow out that hair and beard. You'll need to get really fond of Slim Jims and screaming "Oh yeaaah!" But, this costume is one step towards your first of four championships!