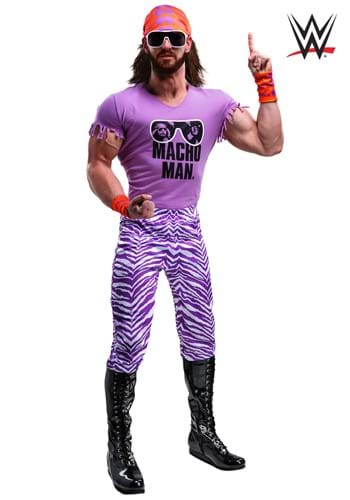 Let us tell you about a man. No... a legend. A true legend of the WWE!

It seems like just yesterday. He came crashing into the ring, with muscles bulging and a wild look in his eyes. He wore audacious outfits and took on any man who was looking for a fight. He bodyslammed wrestling behemoths, like the Ultimate Warrior and Hulk Hogan. He rose to the top, to become cream of the crop. He absolutely owned the ring and the entire WWE. It was... Macho Madness, and it may have been the best thing that ever happened to the wrestling world.

This plus size Macho Man Costume captures Randy Savage's signature look during his tenure as the baddest man in wrestling. It starts out with a brightly colored t-shirt, which is made out of a spandex blend material that stretches to fit. It also has Macho Man's shades printed right on the front. The matching pants feature an all-over zebra pattern and they even feature an elastic band in the waist to help give you a comfortable fit. The wristbands and bandana both have a bright orange and purple color scheme, fitting for anyone looking to make a scene in the ring. Finally, in order to be the Macho Man, you're going to need a pair of shades. This costume comes with a pair, so you just need to slip them on your face to make the full transformation into the wrestling legend from the 1980s.