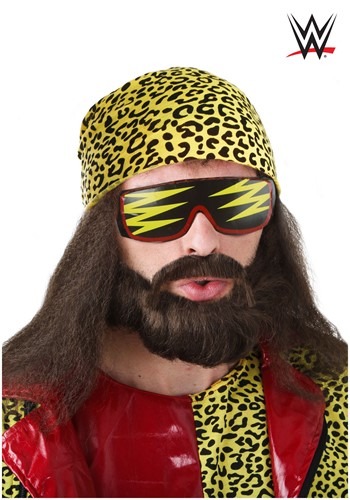 Although, if you're aiming to be like Randy Savage, then you'll need more than just madness. You'll want the muscles. Those crazy loud outfits. A killer entrance song, and some skills in the wrestling ring of course. Even that may not be enough. After all, Randy set some pretty high standards when it comes to appearance.

We know that growing out that much hair can be a bit troublesome, however, so we've got an alternative for you. Our Randy Savage Wig Kit comes with a brown synthetic wig and self-adhering beard and mustache. There's even an obnoxious yellow leopard-print bandana and red plastic sunglasses with lightning bolts printed on them. This way you can look just like our esteemed Macho Man. Now get yourself some killer fringe and work on that growl, and you'll be golden. Let the madness ensue!

You will probably have the screams and shouts down pat, but when you have this officially licensed Macho Man Wig, you'll have the loud look down as well.