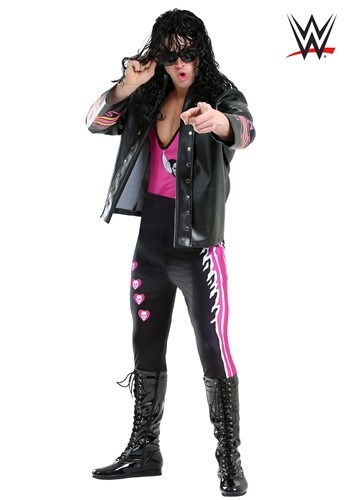 Do you think you have what it takes to suit up as one of the best wrestlers ever to touch the WWE? We're all about it. Because we know you're all about his legacy! The Hart Dungeon. The Hart Foundation. Titles and championship belts galore. And, oh yeah, how to perfectly execute a sharpshooter, too! Yup, your entire life has been building up to this moment, because now you get to be Bret "The Hitman" Hart.

Now, some key things to keep in mind as you move forward in your ulterior ego. Remember that you've been the most successful wrestler in the then-WWF. Your moves are well known and you're destined to earn the title of the World Heavyweight Champion. Just... watch out for Montreal. The mystery of how Hart loses the championship before moving to the WCW would be the most talked-about match in history... which only makes you even more famous!

Because we are so into everything WWE, we teamed up with them to create this fabulous WWE Bret Hart costume right in our own in-house studios. This officially licensed look perfectly captures his in-the-ring look from the 80s and 90s. A graphic printed tank top and pants set looks just like a real wrestling singlet and tights, and it's done in his iconic black-and-pink style. Complete with authentic logos! 95 percent polyester with 5 percent spandex for just the right amount of stretch, the top and pants are great by themselves, but we also include a detailed faux leather jacket so you can get the ring entrance just right too! We highly recommend picking up the wig, shades, and boots so you can be the spitting image of The Hitman.

2010 would bring Hart back into the WWE and end the long feud. But, only you can know the truth of the Montreal Screwjob when you wear this costume and channel the power of Bret Hart.