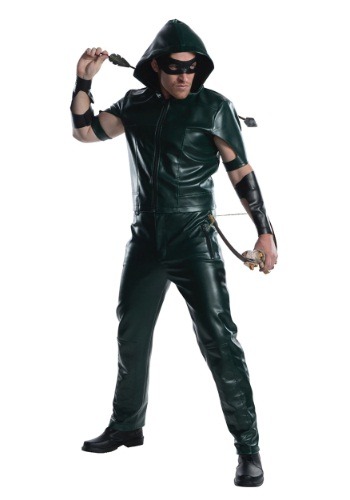 some dirty deeds are going down in Starling City. It's out of hand, criminals are doing their business in broad daylight! Yeah, these bad guys might be wearing tuxes and drive nice cars but that doesn't mean they don't deserve justice. You've been gone a while, surviving in the wild jungle island of Lian Yu for five years but that doesn't mean you don't care about what's been happening in your hometown. It's time to get things back in order!

It turns out that the island life you were living is paying off in civilization! For instance, you learned to live on the bare necessities and, more importantly, get those necessities on your own. You learned to adapt, sense danger, and react. In short, you became pretty darn hardcore!

We love Oliver Green and not just because he's a boss with a bow and arrow. He sees his city struggling with corruption and instead of fading back into the forest that he had grown so used to, he decides to help out his very own jungle, the concrete jungle that is. Plus, he wears a mask, that's the epidemy of cool. But we're a little biased, being a costume company and all.

If you'd like to rescue your city from the tyranny of high powered villains, this costume is sure to put you in the right mindset. This faux leather ensemble includes a hooded jacket with a front zipper, pants with a zipper and belt loops for a comfortable fit, arm guards, and an eye mask. Add on one of our bows to make your look complete. With a bowman like you around those high-class thugs had better watch their backs!

£91.99
Item # CH03202 | Write A Review
Items Included
Product Highlights
Size Chart
SMLXL
Inches Centimeters
Costume Sizing Tips
Product Description
Questions & Answers
There are no questions for this item yet. Be the first to ask a question!
Ask a Question
Reviews Write A Review