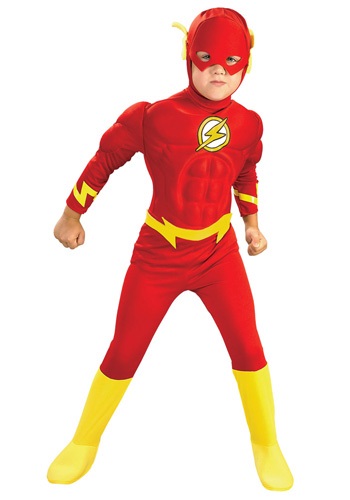 Life for little kids isn’t what it used to be. Afternoons used to be spent helping out at home or laying in the field picking daisies and watching the clouds. Kids used to play make believe in the woods and build soapbox cars in the shed. Ah, the good ole’ days.

But the schedule of a young person today is not all daisy chains and daydreams. There’s soccer practice, tuba lessons, swim team, and debate club. Your kid is President of his 6th grade class, the lead in the school play, and tutoring two other classmates in math. He volunteers for Habitat for Humanity on the weekends. To say it plainly: kids today are busy. And your little one is the busiest bee of them all. So, he really only has two options--he can start giving some things up, or he can become….The Flash! Yeah, we kinda thought he’d go the whole superhero route. Well, no matter! Because we have this Child Deluxe Muscle Chest Flash Costume just waiting for him to suit up into, and being able to run lightning fast is bound to make getting around to all those extracurriculars (oh, and did we mention he’s also captain of the track team?) much, much easier. Plus, this muscle suit means he doesn’t have to give up any extra time bulking up at the gym for his new superhero status (which is good, because weight lifting isn’t good for kids, anyway.

And less time in transit means a little more quality down time with you, so everyone wins. Go ahead and grab him this red jumpsuit and mask with its iconic lightning bolt emblem and yellow accents. We can’t promise that he won’t eventually have to drop an activity or two once his classes get a bit harder, but we can promise that once he’s fast as The Flash, he’ll always be home in time for dinner.