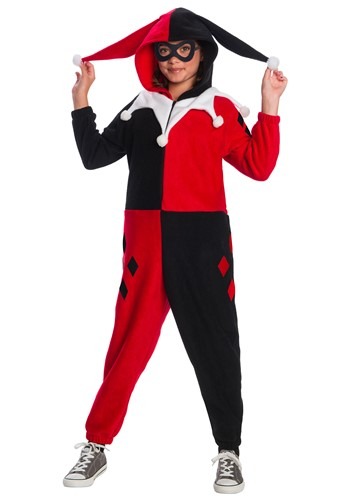 Harley Quinn is a complicated girl. Sometimes, she's causing maximum mayhem in Gotham City. She's running amok on the city, committing acts of villainy, and making sure that Batman is thoroughly annoyed. Other times, she's a Bird of Prey, trying to do good by all the down-trodden and forgotten folks of Gotham... almost like a superhero! You never know which version of Harley Quinn is going to show up to the party!

Well, this officially licensed Harley Quinn kid's jumpsuit has two sides, just like Harley herself! It's one-part awesome cosplay outfit and one-part comfy pajama set. It's a great look that any young Harley Quinn fan will love to wear.

Based on Harley Quinn's first appearances, this girl's jumpsuit captures the look of her traditional costume, while giving your girl a cozy style that she can wear to a costume party, or to a slumber party! The single-piece jumpsuit has the red and black color scheme, just like her suit from Batman: The Animated Series. It's made out of soft fleece material and fits with a zipper in front. It features elastic in the waist, in the ankles, and on the wrist cuffs to help provide a snug and comfy fit. It has a white collar around the neck and it even has a character hood that really brings the whole look together. It's shaped like a jester's hat and comes with two large jester horns with pompoms on each one. Just flip the hood up and your girl instantly transforms into the DC comic book character!

A Harley of All Trades

Whether your child wants to cause trouble in Gotham, head to a costume party, or take a light snooze, this Harley Quinn costume is a great outfit! It's versatile enough to do it all!