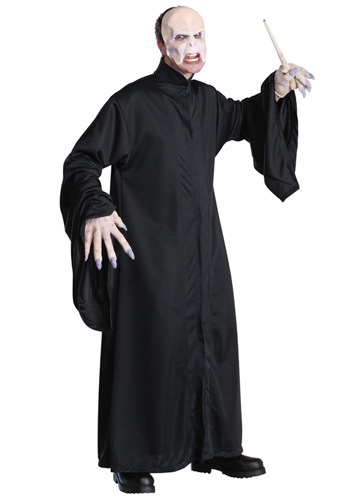 How would your old classmates have described you when you were studying at Hogwarts? Friendly, handsome, inquisitive? Hmm, if only they could see you now! You've lost weight, in fact, it's been said that you're skeletal. They might be especially impressed with your nose-job. It looks like you've had it removed, a pretty brave look if you ask us. The best part? It won't be long, now, before you gain control over both the Wizarding World and those poor, weak muggles.

People might criticize your unconventional looks but we'd like to see what they'd look like coming back from an experience like yours! You've come a long way since your rebirth. We remember when you were simply a face in the back of some poor guy's head, that's a dual use for a stylish turban if we've ever seen one. We've seen you return better, faster, stronger though we're not sure why you've never regained your nose cartilage back, maybe facial structure takes a little more soul? We don't even call you the heavy "he who shall not be named" anymore, instead we're calling you The Comeback King. We're thinking it gives your Dark Lord reputation a lighter touch.

If you're going as "You know who" for your next costume party, you'll love this Voldemort costume. The high collared robe will give you a regal look while the sleeves allow for especially dramatic spell casting and the mask has a freshly resurrected look. To finish off the look, invest in the creepy, pale Voldemort hands. Sure, you might no longer run the world but this costume will definitely rule!