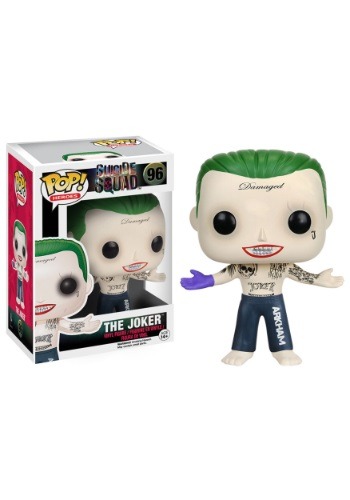 Product Description
So Jared Leto took over the role of the Joker in 2016's hit flick Suicide Squad, and well, we're not quite sure the character is ever going to be the same. Sure, we've had many incarnations of the Gotham City villain, but Leto's signature twisted style really took the villain in a new direction. And of course we're fans of it!

If you're a fan, too, you're going to want to make sure to add this POP Joker Shirtless Vinyl Figure to your collection of DC characters. You could post him on your desk or workstation paired with Harley Quinn, and you'd have two of Gotham's most twisted villains cheering you on while you work on your own villainy! Even if you're not a diabolical mastermind, this POP figure from Funko is sure to look great on display with the other character from Suicide Squad, or even other Joker figures to build a display of the all time greats.