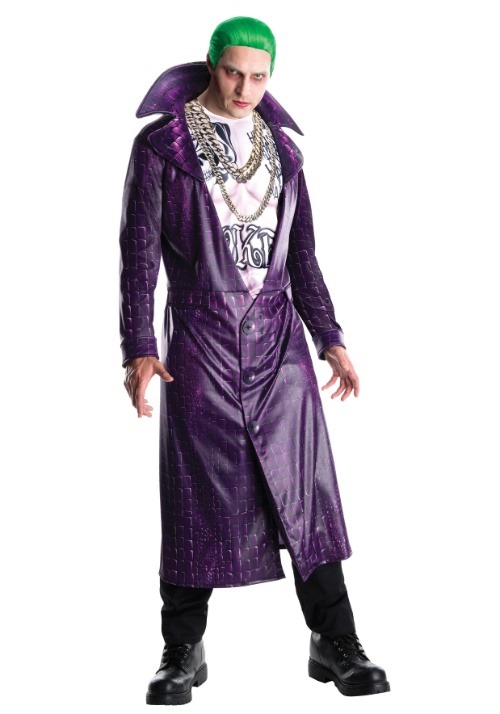 Alright, so when you hear “Joker,” what images pop into your mind? It’s easy to think ‘purple and green,’ but, there is so much more potential in that most illustrious of names. We’ve all seen countless forms of the Joker appear from page to con and from small to silver screen, but one thing that we are all certain of is that the Joker’s tricks are never over. But, now he’s up to some brand new ones! Just because he’s gone and joined up with a group of would-be heroes doesn’t mean he’s totally changed up his ways.

He's a straight up psychopathic gangster in David Ayer's Suicide Squad. Jared Leto brought a new style to the character, not quite like anything we'd ever seen before! Cunning, yet violent and riddled with some insane tattoos. Now, we have the costume that captures his look from the movie in perfect style, so you don't have to head to a tattoo parlor to look like him!

This licensed Deluxe Suicide Squad Joker costume comes with everything you need to transform into the character from the movie, aside from the crazy laugh and an arsenal of (plastic) weapons. The costume comes with a jacket and shirt combo that fits easily with Hook and Loop fastener in the back and even has all of the stylized tattoos that the Joker has in the movie. The jacket portion of the costume has a faux snakeskin print on the front, along with printed buttons and an exaggerated collar. Just add the licensed wig to your order and you'll be ready to bust your Harley out of the joint in no time flat!