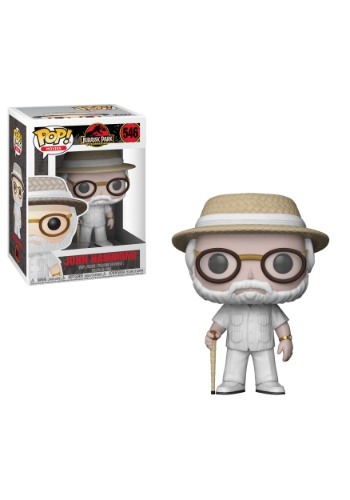 We spared no expense

Jurassic Park was quite the adventure, both the movie and the fictional park featured in it, and of course, the man with the plan the whole time was John Hammond. Part venture capitalist, part scientist, part grandpa, his ostentatious activities set the whole course of the Jurassic Park franchise into motion.

Of course, you probably spare no expense yourself when it comes to collection, so you're wont to make sure you collect everything Jurassic Park you can. Well, let's get you on the next big thing. Funko's Jurassic Park series! "Finally!" you're probably saying to yourself, Funko studios release this long sought new series in 2018. And we're super happy to make them available to you! Start your collection out right with this Jurassic Park John Hammond vinyl figure.

Molded in that adorable Funko POP! style that we all love, this vinyl figure comes in the perfect POP! form. Combined with all the character details of John Hammond that you'd expect, too, right down to his amber cane. This figure stands 3 and three-quarter inches tall, and comes to you in a window display box. And as are all Funko POPs, it's officially licensed!

Build your own island?

Maybe having your own Jurassic Park wouldn't be such bad idea! Come to think of it, if it involves dinosaurs, it most definitely would be. Just collect the entire Jurassic Park Funko POP! series, and you'll have plenty of dinosaurs to call your own. Along with all of your favorite characters!