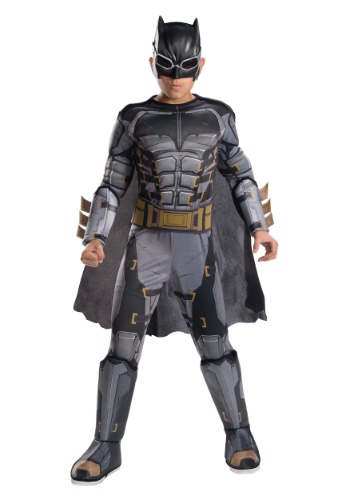 The average person just doesn’t have the kind of bankroll to turn their child into Bruce Wayne. His Batsuit alone probably has millions of dollars of technology invested into it. And how much do you think one Batarang costs him? Those things aren’t cheap. So, when your child tells you that he wants to be Batman, the cruel reality is that the cost is just too high!

The good news is that there’s an alternative option to turning your child into DC’s greatest hero and it doesn’t require billions of dollars. This deluxe boy’s Tactical Batman costume comes with everything your child needs to be the leader of the Justice League at an affordable price! It comes with a full-body jumpsuit that has muscle padding in the chest and arms. It also has printed armor on the exterior, along with the iconic Bat-symbol. It also has small spikes on the wrists, giving an imposing look to any villain who might cross paths with your young superhero. It also comes with a scalloped cape, since no kid can be Batman without a cape! Of course, it also comes with the iconic mask, so your little one can hide his secret identity from villains like the Joker and Penguin.

Once your child has the whole ensemble on, he’ll be ready to join up with the rest of the Justice League to battle it out with Steppenwolf. Just remind your little one that he’s not actually a billionaire, so he’d better not lose any Batarangs when he’s out there fighting crime.