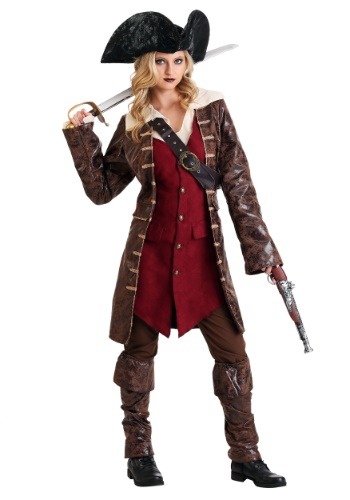 The debate continues.  Brilliant and lovely geektastic individuals everywhere have been searching and arguing for what faction of the epic trio may ultimately win victory over the hypothetical throne of nerdery.  It seems an impossible thing to win, though, like a game of paper, rock, scissors where an imaginative mind can change the rules with a bit of clever debate.  What if I *throw* the rock at the paper, though!?

Well, we seem to have a solid stalemate between the futuristic wonder of the robot, the mystical mighty of the ninjas, and the expansive intrigue of the pirate.  However, the only throwing star in the robot gears that matters is the revelation of the Queen of Tortuga.  Ever heard of the robot haven?  The ninja solace?  No!  But, the secret kingdom of the pirate island is a real ambition... and, even more, the idea of ruling it!

Step into the role of the pirate queen with this Caribbean Tortuga Pirate Women's Costume.  This sinful garment combination will leave all seeing your pirate crown (even if it is actually just an awesome wide brimmed faux suede pirate hat).  The shirt has muslin sleeves and a ruffled collar while the suede vest and matching faux leather belt feature the look of antique brass buttons and buckles.  The jacket's decorative stitching would have them gawking if not for the authority that the hat offers!

ROLL THE DICE AND SAIL THE SEAS

Stand as the ruler of the hidden pirate island and command your knaves to fetch your cutlass when you stand at the head of the table and have your cabin boy fetch your rum.  The world might think that the robots and ninjas have a chance to win in the war against the pirates, but you'll show everyone the truth when you reveal what's hidden up your sleeve!