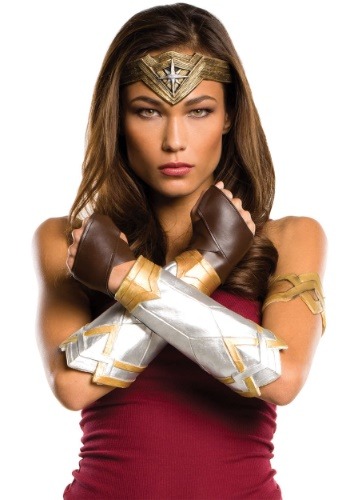 Not All Queens Wear Crowns

This sentiment also holds true for warrior goddesses too. Diana Prince isn't draped in lush gowns, dripping in diamonds while positioned on top of a gold-plated throne because she was born into royalty; on the contrary, she's on the battlefield fighting for mankind, going toe-to-toe with Ares without an ounce of fear. Now, that's a queen who slays. That's the type of queen we want to be.

Feel empowered and bold while beaming with superhero-sophistication by wielding a golden lasso instead of a jewel-encrusted scepter. This Wonder Woman accessory kit creates the appearance of a 21st-century warrior goddess who fights for what she believes in; a true role-model worth emulating.

The officially licensed costume kit comes with everything needed for a complete Amazonian makeover. You'll receive the tiara, gauntlets, armband, and gloves which are all molded from soft plastic and meticulously painted. The tiara fastens around the head via an elastic band for comfortable wear. The armband is elastic too so it easily stretches around arms (no matter how big your biceps!) The faux leather gauntlets are pulled over forearms while coordinating gloves finish out the fierce look.

It's About To Get Scary For Ares

Put the pesky Greek god of war in his place but first, complete your Wonder Woman costume. We recommend pairing this kit with a sword and shield for a powerful appearance.