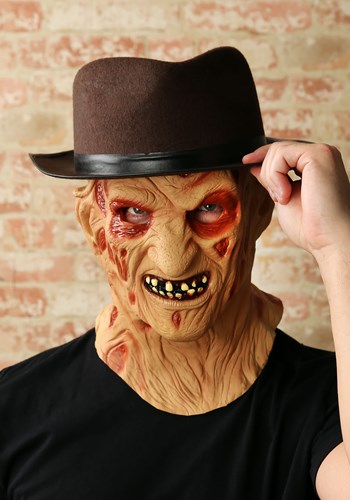 You’ve been having nightmares recently. Nightmares so terrible, you don’t want to risk even falling asleep. So you chug cup after cup of coffee. You chew gum constantly. You constantly down bottles of soda. You crank up the radio and sing along. But despite your best efforts, inevitably, when the night gets late, you start to nod off. You shake your head to clear the sleepiness. You rub your eyes. But that heavy feeling refuses to go away. And slowly… slowly… your eyes start to close… and you start to dream.

The dreams always start happily at first. Colorful gardens. Puppies. Candy stores. But inevitably, the dreams change. You feel their eyes, watching. You hear footsteps pattering behind you. Then they appear, the most terrifying nightmare of all…. Teenagers!

Well, whatever the Son of 1,000 Maniacs dreams about at night, now you can induce some nightmares of your own with this Realistic Freddy Krueger Mask from Nightmare on Elm Street. The authentic latex mask looks just like Freddy Krueger from all those Nightmare movies. It includes openings for the eyes, nose, ears and mouth. Now all you need is a ratty sweater and burned fedora, and you'll be ready to inspire some nightmares of your own!

£25.99
Item # RU4173 | Write A Review
Items Included
Product Highlights
Size Chart
ST
Inches Centimeters
Product Description
Questions & Answers
There are no questions for this item yet. Be the first to ask a question!
Ask a Question
Reviews Write A Review