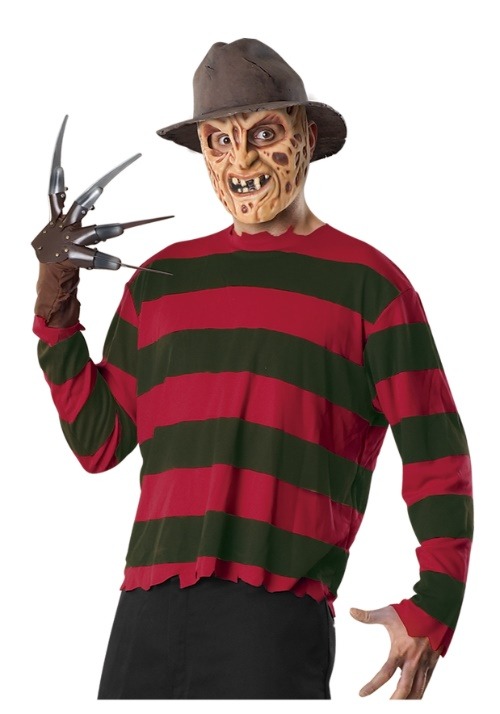 You’ll scare everyone in the vicinity of Elm Street in this authentic Freddy Set. When you get in the mood and don the Freddy Krueger serial killer getup––green and red striped shirt, fedora, gloves with plastic claws and––wait for it––disfigured face mask, you will incite bloody-murder screams––the stuff of nightmares.

To help you get into character: Freddy’s scarring is the result of being burned alive by the parents of Springwood. Who can blame them? He killed their children. Oops. He gets his revenge, however, by invading their dreams––hence The Nightmare on Elm Street, his old stomping grounds. Freddy is seemingly immortal––nothing can take him down. Is he dead? Alive? Who knows? He’s terrifying whatever his state. Don’t be too harsh in your judgment of Mr. Krueger. He was the product of a troubled upbringing––the bastard son of 100 criminally insane maniacs. Sob sob. His mother was a nurse at an asylum and was accidentally locked up with the nuts and impregnated with Freddy. Maybe you’ll have some compassion now when you put on Freddy’s garb. He had no chance at normalcy, did he?

“One, Two, Freddy’s coming for you!” Here comes Freddy, star of movies, TV, and video games. But don’t get too cocky. You’re a much-feared villain but far from most-feared. Sky2, the British TV channel, rated Mr. Krueger only the 8th greatest villain. The American Film Institute ranked Freddy 40th on it’s 100 Heroes and Villains list. OK, it seems wrong to combine heroes and villains in the same list. But 40th? Seriously? Who the heck is that much more frightening than Elm Street’s resident slasher?