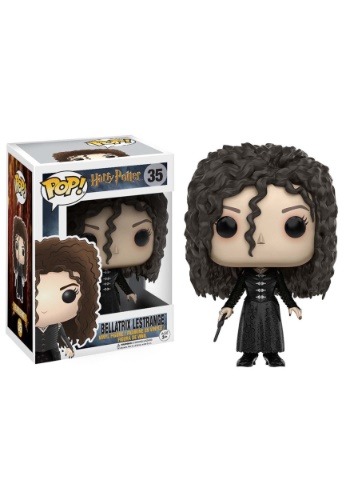 Known for her insane laughter and a propensity for casting Unforgivable Curses, Bellatrix is a malevolent witch who is just as eccentric as she is mean. She'll shoot a green light from her wand, yell "Avada Kedavra," and then cackle deliriously once her adversary is lying on the floor lifeless. The term "wicked witch" definitely applies to Bellatrix but one could also label her as a "wacky witch" too. And because we are eternal optimists, we choose to overlook her depravity and focus on Bellatrix's quirkiness instead!

Voldemort's most loyal support is now ready to support you. If you're looking for a rather eccentric friend who'll have your back til the very end, then this Bellatrix Lestrange Funko POP! is the perfect addition to your Harry Potter themed collection. The vinyl figure is clutching her wand, prepared to strike anyone daring enough to defy you!