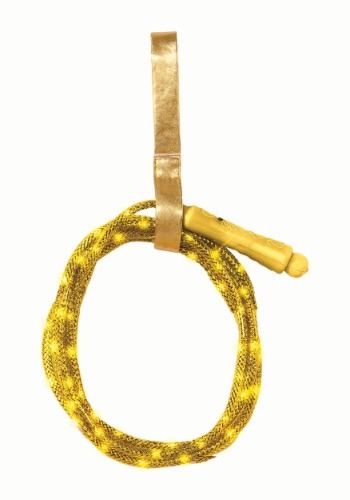 Wonder Woman has always had all sorts of amazing artifacts at her disposal.  Really, people often look at Batman as being the guy who has a gadget for everything, but who can even compete with Princess Diana who has an entire ancient history of mythologically magical items bestowed to the Amazons from the gods, themselves?  Have interest in a set of armor that wards one from all sorts of harm and heat?  How about a shield that can deflect the heat rays from a Kryptonian?  Taking down an entire swarm of Nazis who are fully loaded with guns and ammunition?  How about some bracers from Hephaestus?

Well, of all of her amazing artifacts, one will always stand out as the chief above them all:  the magical golden Lasso of Truth.  This thing can do it all – possibly literally.  Between compelling truth and binding up even the mightiest foe with little effort, the thing even protects itself against being in the wrong hands!  Fortunately, your hands are just right for this officially licensed DC Dawn of Justice Wonder Woman Light-Up Lasso.  The nine foot cord lights up with fiber optics to shine like the magical lasso, itself.  We can’t be certain that those you find are forced to speak the truth, but they don’t know that!