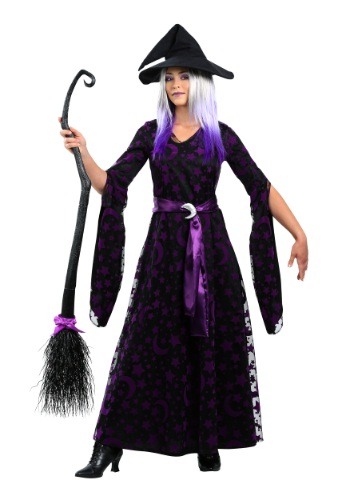 Obviously, there would be a lot of perks to being a Witch. With all the spells you can cast and the potions you can make, there is pretty much nothing that you can't do! That being said, we still think that the best part of being a witch would be having a magic broom. It would be so convenient! It's like having a motorcycle that you can carry around in one hand. And not only that, this motorcycle flys!

Can you imagine zooming over traffic without your flying broom? You could make a killing as a taxi driver in the middle of the city, people would pay a lot of money for a ride that doesn't hit any traffic! We know we would pay good money for that. Yeah, Having a flying broom is definitely on our bucket list, though we know it will probably never happen... Oh well, doesn't hurt to dream!

This witch costume is both spooky and stylish! You'll be wearing a dress and an overdress, and the overdress is decorated with the moon and stars, both of which are crucial tools for any witches spellcasting. We've also included the purple waist sash, which is the same shade of purple as the moon and stars and has a moon emblem on the front. Lastly, we've included a witch's hat! No witch costume would be complete without that instantly recognizable cone-shaped hat.

When you become a witch, what kind of spells will you be casting? Sure you could turn people into frogs or cats or whatever, but we think you should focus more on positive outputs. Maybe you could invent a spell that turns everything into trampolines? That sounds like a ton of fun! In theory at least. It might be hard to drive a car on trampolines... Whatever you do, have fun!