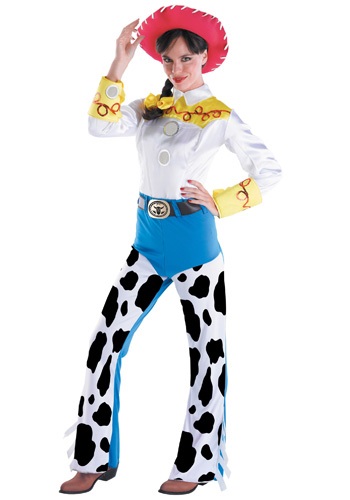 Remember when we all had that initial glimpse into the life of the toys in the grand chest of our favorite young lad? There was an instant competition between Woody and Buzz Lightyear for who might be the best and favorite toy of all time. Now, we’ve seen for years that kids and adults alike have the ongoing debate: robot, pirate, ninja. But, Toy Story sort of demands that we include cowboy and astronaut in that list. And, especially if you still have a fond recollection of your early days, it’s all about the latter two.

But, one Toy Story couldn’t be enough… and neither could just one cowboy. Turns out that the ability to fly (sort of) and take down dangerous aliens (kind of) was just too exciting. Fortunately for the cowboy lovers out there, we’ve got the perfect complement to your favorite sheriff: the yodeling cowgirl, herself, Jessie.

Toss on this exciting costume and you’ll transform into the lovable character that became everybody’s favorite addition to Andy’s toy collection in Toy Story 2! This western styled outfit comes with all the bells and whistles. It has an easy to slip on jumpsuit that is designed to look exactly like the outfit that Jessie wore herself! It has her classic black and white cow print chaps over jeans and her cute formal shirt with red and yellow accents. So you could really say this one-piece has it all! Unless, of course, you want to really bring the Toy Story to life and join up with a couple friends. In that case, join up with a Woody and Buzz Lightyear costume and you’ll be the triple-threat that is ready to bring home all the toys.