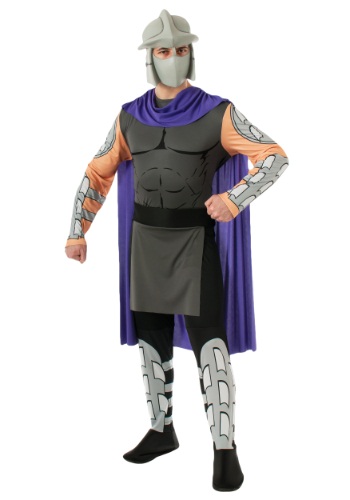 Every hero has to have a villain, and every costume party is no different. So when your pals invite you to a themed pizza party, you know just how to dress to help bring the shindig out of its...ahem...shell.

Because let’s face it, everyone loves a villain--even if they’re not supposed to. So if you have an intense hatred for Leonardo, Donatello, Michelangelo and Raphael...good! Take it a step further and get fully into character by telling other partygoers that the Foot Clan has a new opening in the supreme overlord position. And since you don’t quite have your own Technodrome for transportation (or, let’s face it, a strong mastery over the ninja arts) you’ve decided to win them over with this TMNT Adult Shredder Costume. Even if people don’t buy your tale entirely, we bet it will be the most interesting conversation of the evening. After all, eating a slice with a real, live bad guy is not your everyday occurrence.

This licensed outfit recreates the look from the classic 1987 cartoon series, Teenage Mutant Ninja Turtles, so you'll be the spitting image of the notorious villain, Shredder! When you see Michelangelo going for his tenth slice--the last in the box--you can shut the lid ferociously on his little green hand and show him who is in charge. We commend your original take on a TMNT theme, because a pizza night full of Ninja Turtles is just that--but an evening that features archenemies and all kinds of dramatic tension, now that’s a true party! Anything less would be simply villainous.

£34.99-£44.99
Item # RU887325 | Write A Review
Sale - Save 22%
Sign Up To Be Notified When Your Size Is Available
Items Included
Product Highlights
Size Chart
MSTXL
Inches Centimeters
Costume Sizing Tips
Product Description
Questions & Answers
There are no questions for this item yet. Be the first to ask a question!
Ask a Question
Reviews Write A Review