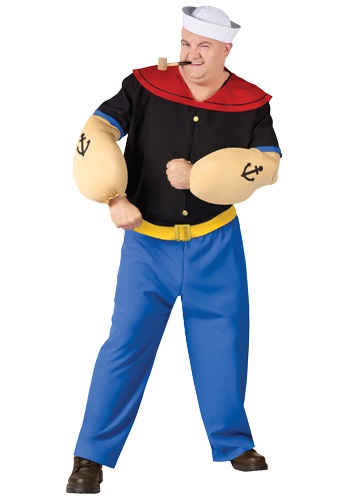 We would like to know whose idea it was to make a hero whose powers were based on spinach. Seriously. We know spinach is supposed to be good for you and all, butspinach? Even if spinach did have some kind of huge muscle and energy boost there's no way that you'd gain its effects instantly like Popeye does.

Okay, so that's been bothering us for a long time and we had to get it off our chests. Don't get us wrong, we love Popeye, alright? Like what other superhero is a smarmy do-good sailor who's out to help the little guy? No one. Popeye is a unique and special hero. He's pretty awesome.

Yeah, okay so him being iconic is largely due to his spinach-induced strength (which we feel is totally false advertising for spinach), but he's got a lot of other features that make him unique. Like those crazy forearms, or that squint and puckered mouth with pipe. Also that outfit! Bright colors and pretty recognizable. As a matter of fact, we've got some of his threads here. You could order this Popeye the Sailor Man Plus Size Costume if you want to look like the heroic sailor himself. It comes with blue pants, a black top with red collar and gold buttons, padded forearms and a white sailor hat. That way you'd get to be just like our hero Popeye. Sadly, most people would probably want to you be in character and consume spinach, despite the fact that you won't get super strong immediately. We'll leave that one up to you (although we don't recommend it).