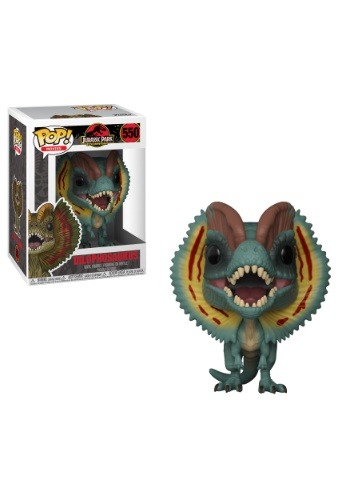 You know what we're talking about.

"One of the earliest carnivores, we now know Dilophosaurus is actually poisonous, spitting its venom at its prey, causing blindness and eventually paralysis, allowing the carnivore to eat at its leisure. This makes Dilophosaurus a beautiful, but deadly addition to Jurassic Park."

Thanks, Tour Vehicle Narrator! Of course, we've never traveled to Jurassic Park (save even Jurassic World for that matter) but if we were to take in a viewing of the classic, original movie, we'd have to think that we'd only come to one conclusion about this particular breed of Dinos. Yup, you just gotta stay away from those spitters!

We're still not sure why the Dennis Nedry theft subplot is in the movie, but, if it's just for the sake of watching the bumbling pseudo-genius meeting his demise? Yeah, we guess that works! Of course, you know all the details, because you've seen the original Jurassic Park plenty of times. That creepy cowl vibrating as a Dilophosaurus prepares to spit all over a disheveled Nedry. Iconic movie imagery, and now you can have a piece of it with this POP! Movies: Jurassic Park Dilophosaurus Vinyl Figure!

This Dilophosaurus comes in classic Funko POP! form, standing about 3 and three-quarter inches tall, and styled as sort of a cute, kawaii take on the frightening movie animal. And the best part? That cowl is open, and it's ready for that venomous action! Of course, because we're fans, too, we are including the chase variant at random, so you have a chance to receive one with the cowl down against the neck. If that happens, be super excited! Because the Jurassic Park Chase variants are sure to be super collectible.