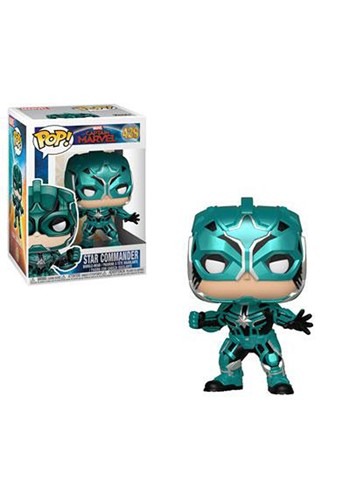 Just look at that snazzy teal suit! Star Commander really does know how to make a fashion statement while defending the galaxy from dangerous threats. That sleek metallic color makes his Kree abilities look even more impressive and that silver star on his chest makes him look like some kind of champion from the Nova Corps. Actually, he’s also quite handsome… he looks suspiciously like Jude Law. Maybe we’ll just redub him as the Snazzy Commander instead of Star Commander.

Of course, this little Funko Pop! version of the character is one cute figure that wears the suit just as well as the character from the movie!

That’s right! This Pop! Captain Marvel Star Commander vinyl figure brings you the snazzily dressed hero that fights alongside Captain Marvel in the latest superhero movie. The figure stands nearly 4 inches tall and he comes posed in an action-packed stance. He looks ready to kick any supervillain’s butt.

When you add this figure to your collection, you can rest assured that he’ll ward off the Skrulls. He pairs perfectly with our Captain Marvel Pop! figures as well, so make sure you give him a team to hang out with!