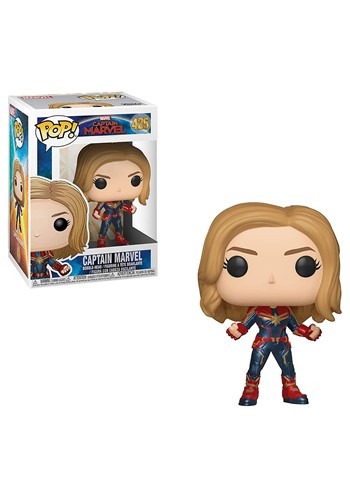 We’ve waited long enough. Here she is, in all of her glory, Captain Marvel! She can fly and shoot energy out of her hands like Iron Man. She has the strength of a Norse thunder god, like Thor. She has the moral integrity of Captain America and if you make her mad, well… let’s just say that Hulk has nothing on her. Heck, do we even need the original 4 Avengers from the Marvel Cinematic Universe anymore?

It’s no secret that Carol Danvers, Captain Marvel, is a pretty big deal. Her movie debut is proof of that. Now, you can add her to your collection with this Captain Marvel Funko Pop! which is inspired by the movie.

This Pop! Captain Marvel Vinyl Figure brings you the determined hero in a cute and collectible form! She’s wearing her red and gold outfit from the movie and she looks like she’s ready to kick some Skrull butt. She’ll fit right in as the leader of your Marvel Pop! collection, but she also doesn’t mind just hanging out solo. If you’re a fan of Captain Marvel and the way she battles against evil aliens, then you’re going to love this Captain Marvel Funko Pop!