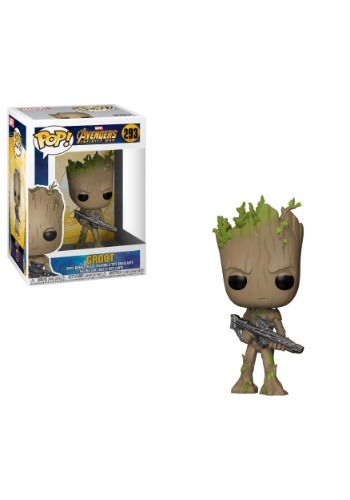 They Just Grow up So Fast

It happens in an instant. You end up wondering where the time went! One second, they're just a sapling. They're dancing in a little pot of dirt and they're just learning how to say, "I am Groot." Then, the next second they're walking around and helping you beat up some thugs inside of a Ravager's ship. Then, you look away for a second and they're standing alongside Thor and getting ready to do battle with Thanos! It almost brings a little tear to your eye just thinking about it!

Yes, before long, Groot may just be a full-grown, 15 foot tall tree-creature again. It's time to capture this moment in Groot's childhood before he's no longer a cute little guy anymore! It's good news that Funko feels the same way and they've created this little Pop! vinyl version from Avengers: Infinity War.

This Groot Pop! vinyl figure is the latest collectible figure from Marvel's Avengers series. He stands nearly 4 inches tall and he's even holding a blaster rifle in his hands. He also has a very mean and determined look on his face. The top of his head has green "leafy" accents. You can pair him up with his Guardians of the Galaxy pals, or just sit him down next to you solo for the next big adventure!