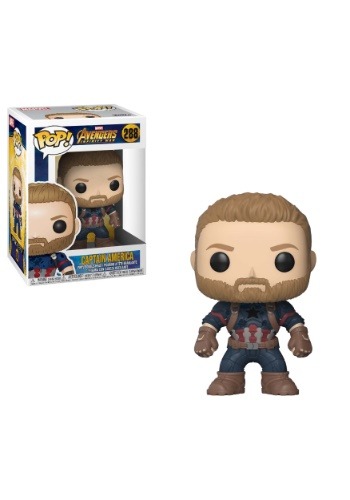 Well now, hello Steve Rogers! We see that you’ve grown a grizzled beard in your absence from the public eye and, quite frankly, we have to say that it looks mighty handsome on you. You should have been rocking that manly mane years ago when you were chasing after the Winter Soldier. You should have been rocking it when you were having that little tiff with Iron Man! Why, his beard is almost like a new superhero itself (we refer to it as Captain Beardy). We just can’t help but think about how much bearded Captain America that we’ve missed out on…

The good news is that he’s proudly wearing his new beard in Avengers: Infinity War and this Pop! Captain America figure is also rocking the new beard to make up for lost time.

This Pop! Marvel Captain America figure brings you bearded Steve Rogers in all of his glory. The Pop! vinyl figure has other features too, but who cares about them? He’s got a handsome beard and that’s the reason you’ll want to add this little figure to your Avengers Funko collection immediately.

Yes, His Beard is That Important