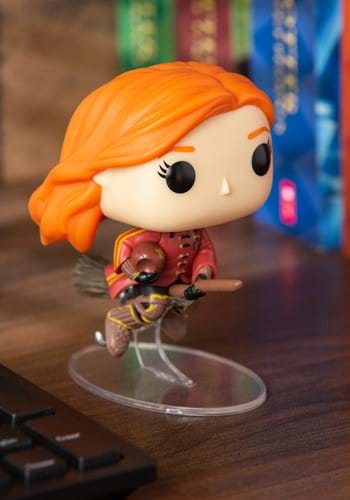 "There's the Silver Lining I've been looking for"

Ginny didn't have an easy first year. There's something about becoming possessed by the most powerful dark lord when you're only ten years old that would put a damper on anyone's school career. With the many different adversaries her brothers have stirred up ahead of her, her path wasn't ever set to be paved with gold. But here's the thing, Ginny is a strong and sassy girl who quickly rose to glory in the halls of Hogwarts, despite the cloudy outlook set out for her. Take Quidditch, for instance, as soon as she got a chance to be on the roster, she took it, throwing down some major skills on the fields as a Chaser. In fact, she ended up as a professional after she graduated from Hogwarts! Hmm, we don't think that Oliver Wood ended up with that career.

Ginny is flying towards the goal with the Quaffle under her arm, on her way to get yet another goal for Gryffindor. A clear plastic base gives her that flying look. Now, we don't know anyone else who's eyelash game is as strong as Ginny's when they're playing any type of sport but that just might be part of her witchy powers!

Ginny is a pretty skilled witch, no one would argue with that! She throws down an impressive Bat-Bogey Hex, she's not afraid to go after whatever she wants, and her time in Dumbledore's Army taught her to fight for her school with courage and strength. Basically, whether you have her by your computer screen to look at throughout the day or with the rest of you Harry Potter collection, she's someone you want at your side!

£10.99
Item # FN26706 | Write A Review
Coming Soon
Sign Up To Be Notified When Your Size Is Available
Items Included
Product Highlights
Size Chart
ST
Inches Centimeters
Product Description
Questions & Answers
There are no questions for this item yet. Be the first to ask a question!
Ask a Question
Reviews Write A Review