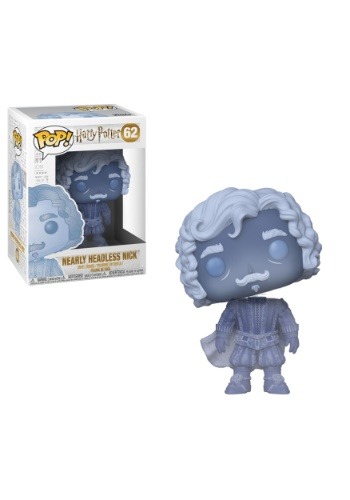 There are plenty of delightful ghosts at Hogwarts. The Fat Friar is always boasting about pulling rabbits out of the communion cup back in the Medieval era. Sure, it got him executed but he's still funny in the afterlife. The grey lady might not have a lot to say but she sure is a site to see. Even moaning Myrtle has her higher points! But we have to say, no ghost will ever be as popular as Nearly Headless Nick. After all, his 500th death day party was an event that no one will ever forget! We want a ghost orchestra at our next party!

This Pop Vinyl figure is sure to stand out from any others with wildly unique translucent blue vinyl. As his head is wildly tilted as only poor Nearly Headless Nick's head can be, it doesn't turn back and forth (wouldn't that be creepy?). The details on his tunic are intricate and beautiful.

Are you ready to add an important yet unique character to your Wizarding World collection? Nearly Headless Nick will slip a macabre theme into your Pop vinyl or Hogwarts collection. Where would Hogwarts school be without the household ghosts?