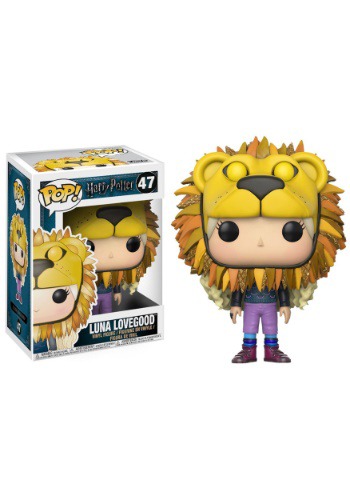 'And Harry Potter's now having an argument with his Keeper,' said Luna serenely, while both Hufflepuffs and Slytherins below in the crowd cheered and jeered. 'I don't think that'll help him find the Snitch, but maybe it's a clever ruse...'

Luna Lovegood is so perfectly quirky and caring, she won all of our hearts the instant we met her on the Hogwarts Express. She might have gotten well known around school for her odd theories and seeing animals that may or may not have been there but that didn't mean that she didn't have a few talents hidden up her sleeves.

We were all more interested in Quidditch once she was the one high up in the stands, announcing the Quidditch scores! Sure, McGonagall might have had to remind her of the names of the players and the score, for that matter but no other Quidditch commentator has ever dressed with so much pizzaz!

This four and a half inch tall Pop vinyl character has an oversized head that can rotate so she can keep track of the game. This is a character who knows how to show her Gryffindor pride!