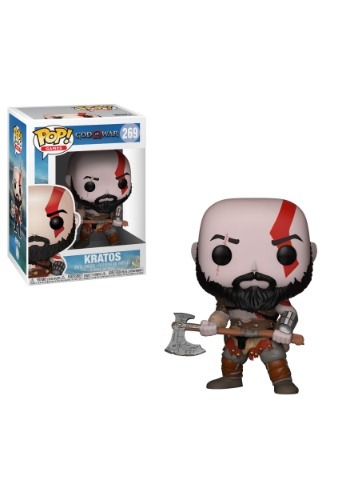 Someone needs to tell Kratos to chill. Is there any god in the Greek pantheon of gods that he hasn’t killed at this point? It’s no wonder that none are still around with the rampage that Kratos went on. Now, we hear he’s been spotted in the Norse lands… and he’s brought an axe with him to start something up with Odin and his crew of gods. Maybe he just needs a good place to chill and really work through his emotions…

Well, now you can at least help this adorable figure work through his emotions! Based on the iconic anti-hero from the God of War series, this Funko Pop! Kratos vinyl figure brings the menacing look of Kratos from the 2018 video game with the classic Funko style.

This God of War Kratos figure is wielding his brand new axe and he’s sporting a pretty rugged beard. He’s looking to deal some serious damage to the Norse pantheon of gods, but maybe you can talk him out of it. He’ll look great in your collection of action figures, but just don’t place him next to any godly figures or he might start a scuffle with them (and with his track record, he’ll probably win the fight too).