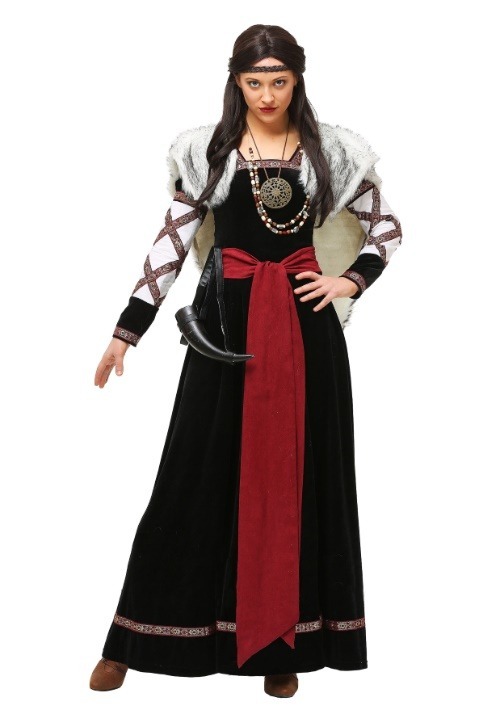 Did you know, over the course of a few hundred years, Vikings formed settlements as far reaching as Russia, the British Isles, Iceland, and even parts of Northern North America? AND did you know that Viking women had a level of agency and independence that was highly unusual for that time period? Seriously, they were allowed to divorce, own land, and there are even records of them participating in battle. We think that’s pretty cool. We also think that in this Dark Viking Dress, you can inhabit that same strong-willed female Viking power, without all the difficult seafaring that really takes it out of a person!

In this fearsome outfit, you’ll be able to lead Viking hordes to victory, conquer your business rivals, or even manage settlements into logical and organized fashions. Heck, that’s how we ended up with Dublin, Reykjavik, and other awesome world cities. There’s nothing you can’t do in this dress--so set your sights on an unconquered land (or party) and make it your own!

This awesome velvet dress was made for mysterious power, and secures with a back zipper and an attached faux suede waist sash. Meanwhile, brocade ribbon trim accents the neckline, hemline, and sleeves. Also included with this outfit is a faux fur shawl and braided faux leather headband, because even back then, accessories really made an outfit. To complete the look are two beaded necklaces, one of which is a metal medallion on a faux leather cord. All in all, this is a classy, crafty, intimidating Viking look! Get ready to rule in this outfit.

Our policy is to always advocate being nice to everyone. So, if you are going to conquer, pillage, plunder, and expand your empire, we say do it nicely. Not to mention, your new subjects may be more willing to accept your rule easier if you treat them well. That's just our two cents. Now go out there and be the powerful Viking maven that you are at heart!