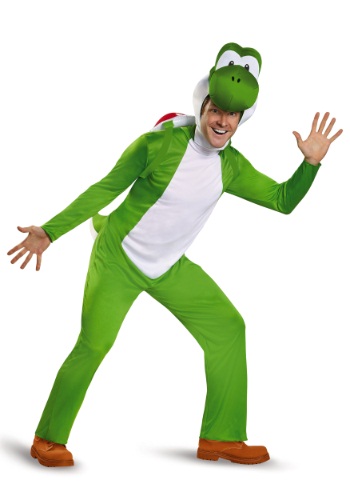 Did you know that Yashi was originally supposed to be a tamed Koopa – if you don’t already know, a Koopa Troopa is one of those little yellow and green turtle creatures, but you probably knew that already! Have you also ever wondered what Yoshi’s gender is? It’s like, he lays eggs but is also referred to as “he” and after a bit of digging that we did, we concluded that Yoshi is just a Yoshi. Another fun fact that we found when we were sleuthing around the other day was that in “Yoshi’s Island,” Yoshi can actually turn into a plane, a mushroom, and even a tree? Now, that’s pretty cool, we wish we were a Yoshi – although we don’t know how fun it would be to be a mushroom, we can see the appeal of being a tree but why a mushroom

Anyways, you now have the chance to transform into one of the most beloved video game sidekicks in this Deluxe Yoshi Plus Size Costume. You can go in a group of Mario, Luigi, and all of the other iconic Mario Characters, go with a bunch of Yoshis, or just fly solo – whatever floats your boat!

£60.99
Item # DI85170X | Write A Review
Items Included
Product Highlights
Size Chart
2X
Inches Centimeters
Costume Sizing Tips
Product Description
Questions & Answers
There are no questions for this item yet. Be the first to ask a question!
Ask a Question
Reviews Write A Review