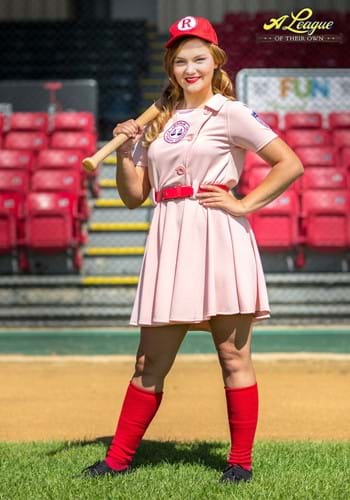 Geena Davis brought Dottie Hinson to life in the Columbia Pictures movie A League of Their Own about a women’s baseball team. The movie featured the All-American Girls Professional Baseball League the Rockford Peaches. Dottie played team’s catcher.

We have to warn you––inhabiting Dottie’s character isn’t likely to bring you into proximity with movie teammates Madonna and Rosie O’Donnell, movie husband and solider Bill Pullman, or movie coach Tom Hanks. Darn it! But inhabiting Dottie might just further embolden your inner Sporty Spice or Gloria Steinem. The real-life Dottie and screen character were pioneering women in sports in the early 1940s during World War II.

In case you haven’t seen the film and care about the plot, Dottie faces her sister Kit Keller, pitcher for the Racine Belles, in the World Series. Kit scores the winning run of the seventh game and the series by plowing into Dottie at home plate, dislodging the ball from her hand. The sisters, who had been estranged, reconcile after the game, and Dottie rides off into the sunset, retired from the sport, with her husband Bob.

Dottie’s costume features a polyester dress (yes, these sporty pioneers had to wear dresses while fielding grounders and sliding into home plate, no doubt resulting in many a strawberry on the gams) with a button-up front panel and side zipper. You can cinch the waist with a red belt. The red cap is Hook and Loop fastener adjustable. Your legs will be protected by red leg warmer-style faux socks with elastic bands. This go-getter costume is officially licensed by Columbia pictures. Grab a bat or catcher’s mitt to complete the look.