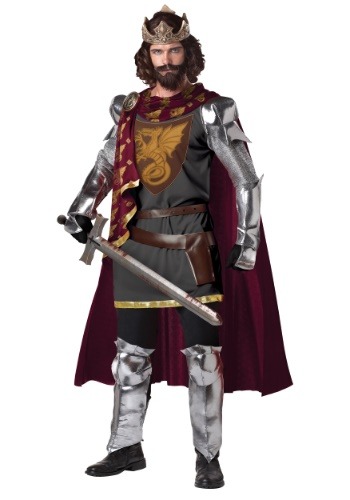 Tell us the truth. You're not one of those Lancelot fans, are you? Yeah, sure, so he's an amazing jouster. And a great fighter. And he's a great knight and soldier and all that jazz. But you do realize that he stole the queen, right? You know that it's his fault that Arthur's kingdom erupted into civil war?  That's right. It's all because Lancelot and Queen Guinevere got too frisky. Lancelot is the reason that King Arthur's reign came to an end! Yeah, okay, both him and Guinevere are the real culprits, but you get our point. Lancelot is bad juju.

King Arthur on the other hand? All he ever did was defend his home from intruders, create a prosperous empire, assemble a team of fighters of legendary proportions, and have probably the coolest wizard in history as his advisor. What did he ever do to deserve such back-stabbery from his fellow knight? Sure, he had his flaws just like anyone, but he was still an exceptional leader and wielder of Excalibur! We still talk about him today, for pity's sake! That's why, when it comes down to it, we know we're on team Arthur.

As a matter of fact, we're so much on team Arthur, that we'd be happy to dress up as him. It's not hard when you've got an appropriately regal outfit, like this Mythical King Arthur Costume. This kingly outfit has a smokey gray tunic printed with a shield and dragon. The sleeves are a metallic knit mesh (to look like chainmail). The 51-inch-long red cape is attached at the shoulders and has a drape across the front along with gold dragon print. There's an antique-looking plastic dragon medallion pin, as well as silver polyfoam armor that attaches to the shoulders. There are also silver polyfoam gauntlets and leg guards, along with a faux leather belt complete with sheath. The crown is a molded vinyl in an antique gold color. No one could possibly doubt your regal prowess in this outfit.

This is another reason why Arthur is better than Lancelot of course: He's a king. That means all the swag and style you can possibly muster, including fancy capes and golden crowns. Have we convinced you yet? That's what we thought. Long live the king!