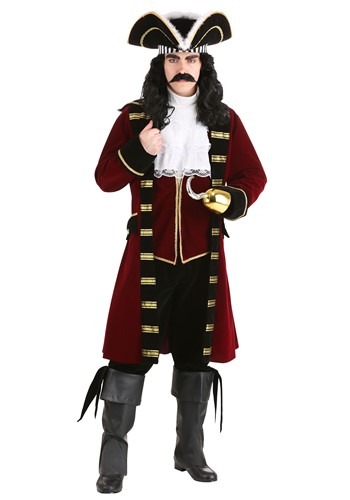 Captain James Hook has a bit of a bad reputation.

Though, honestly, when you're chasing kids around and threatening them with bombs and swords, you really can't maintain a good reputation. But did anyone ever stop to consider that Hook may just be an angry man who's a bi-product of his environment? That all of his anger and vengeance may just be because he was the one hurt in the first place?

Yeah, we didn't think so either. Captain Hook is not that kind of guy. Yes, he has pride, and yes it was wounded when a crocodile ate his hand, but when it comes to vengeance, these are the calculating and conniving moves of a pirate who wants payback. Captain Hook knows full well what he's doing when he kidnaps kids to try and get Peter's attention. He's not simply a wounded soul. He's a mean guy.

And a classy one. Captain Hook has style. That mustache? That coat? This man looks like a professional pirate, which we totally admire, despite his mean streak. And even though we're not keen on making anyone walk the plank any time soon, we most definitely could get behind someone who wanted to dress with that much style. Our Ultimate Captain Hook Costume ought to do it. It includes a red velvet jacket trimmed in black and gold, a gold trimmed waistcoat, velvet knickers, faux leather boot tops, jabot (that neck ruffle thing), and pirate hat to complete the Captain look. We're pretty sure that if you start dishing out orders in this outfit, other pirates will fall into line without question. Just do us a favor and don't hold anyone at cannon-point? One mean old Captain Hook on the loose is bad enough.