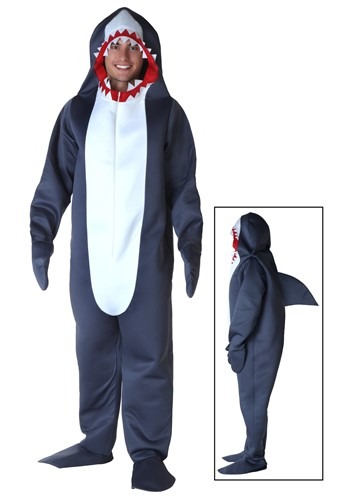 "EVERYONE OUT OF THE WATER, THERE IS A SHARK." Hearing that at the beach is our worst nightmare. The second you hear those words, you know you are no longer in control. That shark is bigger than you, faster than you, and has enough teeth to do some serious damage. Fighting a shark in the water is not a fight that we would win.

That being said, if a shark ended up on land, we think we could take him in a fight. All you would have to do is keep your distance, the shark can't breathe out of the water so it's kind of an unfair advantage.  Do you think that the shark would be afraid of us on dry land like we are afraid of him in the water? We like to think so, it helps make sharks just a little less terrifying.

This costume will turn you into one of the seas most infamous creatures.  You'll be wearing a jumpsuit made of 100% polyester foam. The jumpsuit is primarily gray and has a white belly, just like a shark would. It has attached mitts, shoe covers, and a hood. The hood is the best part of this costume; It is shaped like a sharks head and has an open shark mouth on the front where your head will show through. If you think about it, this costume could either be a shark costume, or a person eaten by a shark, because you are peering out from inside the mouth like you've been eaten!

DO NOT FEAR, LITTLE SHARK

When you become a shark on land, you won't have any reason to fear humans! Just remember, you can breathe out of water AND run on dry land. Those are some skills that would leave any shark jealous!