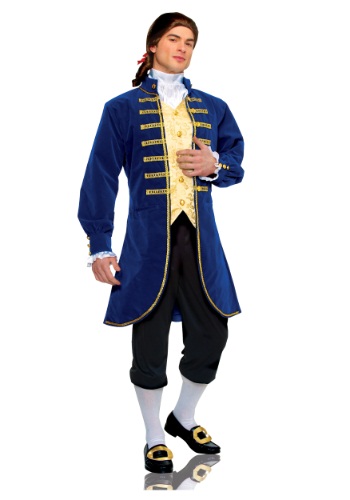 This costume will take you back to the good ol' days. IF, of course, you would call colonial times the good old days. Colonial times would have been cool though! You would have been right in the middle of an extremely historic time! What if you were there when they signed the Declaration of Independence? That would have been pretty amazing! Or what if you attended the Boston Tea Party? It's important to remember, this wasn't really a party at all!

Who knows what you might have done if you had been around in those times. Maybe you would have been George Washington's right-hand man, fighting for our freedom with every step. Maybe you would have ridden with Paul Revere, and yelled "The British are Coming" right along with him! There is no telling what you might have accomplished had you been alive in colonial times.

We can't know what you might have done if you were alive in colonial times, but we can guess at what you would have worn! You'd have worn our colonial aristocrat costume. A prestigious man like yourself would have loved the navy coat jacket, with all of its gold trim and gold buttons. They would match perfectly with the gold vest underneath! Under it all, you would be sporting our black knee pants, which were all the rage at the time. The finishing touch for your prestigious, classy look would be the cravat, which fastens with a hook and loop.

What part would you have wanted to play if you were in the American Revolution? Would you have fought for freedom, or for England? Whatever side you want to choose, you can play out your part in our men's colonial aristocrat costume! Go, and fight for what you believe in!