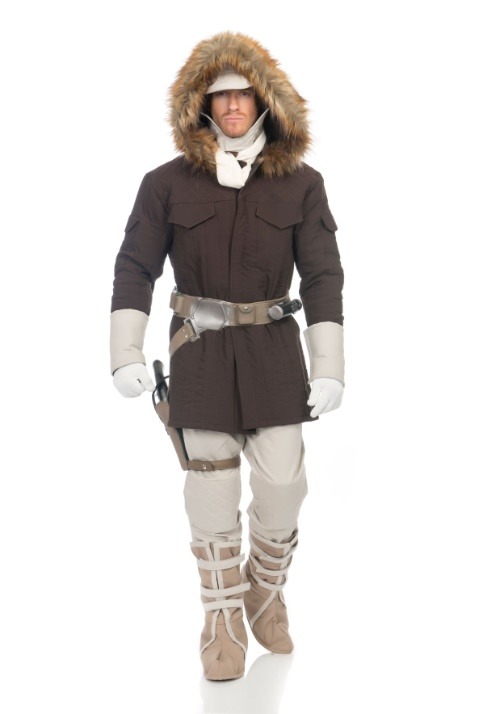 Ready to go to the Ice Planet Hoth? Yup, we figured you would be. You're just like Han Solo, after all, right down to the time you told that deck attendant "Then I'll see you in hell!"

So, the only thing to do if you're a dashing Han Solo type headed for an inhospitable climate, is to make sure you have your winter gear ready to go! You might not have access to gear up at a Rebel storage locker, but don't worry about that, we've got Han's winter gear right here ready for you! This Han Solo Hoth Costume will have you decked out just like Han was in Empire Strikes Back. Hopefully, you won't have to ride around a smelly tauntaun or go around looking for Imperial probe droids, but if you do, you'll have his style done just right with this costume!

This costume ensemble is a movie accurate replica. The brown coat is the centerpiece and features the signature fur-lined hood. (If you remember it being a blue jacket, don't sweat it. It was actually brown but appeared blue in the film!) Cream colored pants, hat, and gloves capture Han's Hoth appearance, and mukluk style bootcovers, a scarf, and a soft molded plastic belt features an attached holder to complete the theme.