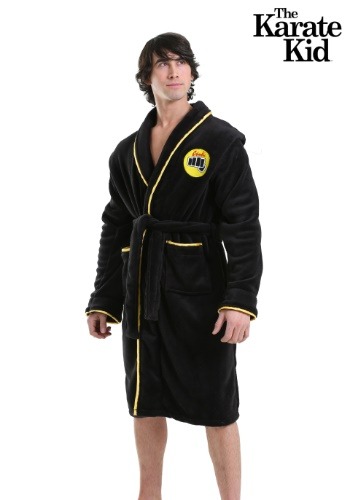 You have a different take on the 1984 classic The Karate Kid. In your mind, Daniel LaRusso, also known as “The Karate Kid”, is actually the bully of the movie, and the Cobra Kai kids are just some good old SoCal boys trying to keep some loud-mouth Jersey-boy from bothering them and harassing their girlfriends. And you know what? It’s about time someone stood up and said “I’m a Cobra Kai guy.”

And that someone can be you! Yes, you! Throw on this Karate Kid Cobra Kai Robe and let your allegiance be known. Show everyone that you also worked hard, everyday, on your form, technique, and inner power; just because your team didn’t get a cool montage doesn’t mean that you didn’t work your butt off, too. And by the way, what’s the best way to relax after a hard training session, or another karate tournament victory? Obviously, wearing this comfortable robe after a long, well-earned bath.

We mean, honestly, LaRusso broke the rules anyway. The ref clearly says no kicks to the head, and what does he do? He kicks right to the head. Ugh. Celebrate your allegiance to the real good guys of this movie, and be stylishly comfortable at the same time.

£50.99
Item # FUN2960AD | Write A Review
Items Included
Product Highlights
Size Chart
S/ML/XL
Inches Centimeters
Product Description
Questions & Answers
There are no questions for this item yet. Be the first to ask a question!
Ask a Question
Reviews Write A Review