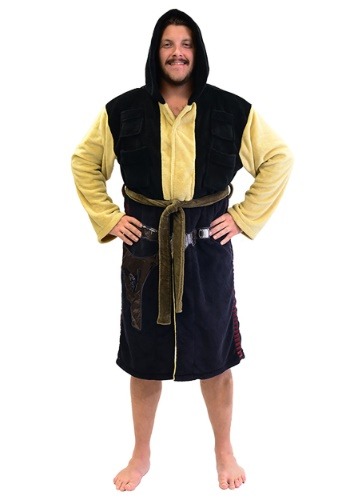 Smuggling fugitives across the galaxy, outrunning Imperial Star Destroyers and hiding out in sketchy locations like the Mos Eisley Cantina—being a scoundrel can be a dirty job! Someone has to do it though. Without Han Solo’s skills, Luke Skywalker would have gotten shot down during the assault on the Death Star and Leia would never have escaped Hoth without him.

We bet Han Solo likes to wash off all the grit of his job away with a nice hot bath at the end of his day. Just soak in the tub for an hour to scrub away all that stress… it sounds quite heavenly, doesn’t it? Afterwards, he can keep his shifty smuggler style by wearing this officially licensed Star Wars bathrobe.

This Han Solo adult fleece bathrobe recreates Han’s outfit from the movie Star Wars: A New Hope. The entire robe is constructed out of a super-soft polyester fleece, but the top looks like a shirt and vest combo. The bottom has a faux belt and holster around it to make you look ready to shoot first, even when you’ve just stepped out of the tub. It also comes with a belt that you can loosely tie around your waist.

Once you have it on, you’ll be ready to plant yourself on the couch for a Star Wars movie marathon… scoundrel-style!