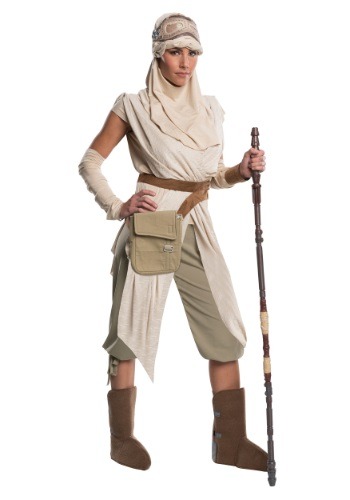 When it comes to characters of the immense Star Wars galaxy, there are some that really stand out. You’ve got your stoic Jedi Masters, your grasping Sith Lords, your funny aliens, your rugged smugglers, your clever princesses… It would be really hard to pick the coolest character from a franchise that spans four decades and hundreds of planets across the universe. Still, if it were up to us, we’d have to pick Rey, the plucky and resilient heroine from Star Wars: The Force Awakens.

Everything about Rey is cool. She grew up alone on the dusty planet of Jakku but managed to carve a life for herself by digging through crashed Star Destroyers (doesn’t that sound like fun?). Then, when she met BB-8, she risked her own life to save him and keep him safe, even though it meant leaving the only place she’d ever known and joining a ragtag resistance group going up against overwhelming odds as they tried to take down the First Order. Plus, she manages to hold her own against Kylo Ren, using a light saber she’d never touched before. And she’s got Force powers that have barely even been tapped yet. We know she’s going to go on to change her galaxy forever, and we can’t wait to watch her story unfold on the big screen!

Now you, too, can prepare to join Rey’s fight against evil, thanks to this Grand Heritage Rey Costume. The licensed Star Wars costume stays as true as possible to Rey’s look from the movie, complete with a tunic top and matching pants. There’s also a headpiece like Rey’s, complete with molded latex goggles, and brown boot covers. The only things it doesn’t come with are Rey’s Force powers and bio-staff skills… You’re going to have to supply those yourself.