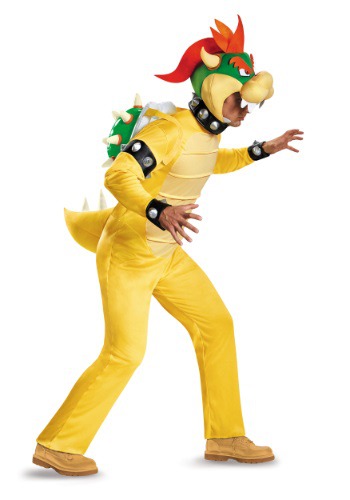 Well, it took a lot of effort, but you managed to do it. You kidnapped Princess Peach and took over the Mushroom Kingdom. Now, not only are you the King of the Koopas, you’re king of the entire land! They laughed at you when you said you were going to do it, all those months ago. They said there was no way that a bipedal tortoise could conquer a kingdom. But you showed them… you showed them all! The only thing that’s left is to convince the beautiful Princess Peach to marry you. It will take some time. You admit you’re rough around the edges. But you know if you’re patient, and sweet, and remember to brush your teeth and not set her dress on fire with your flame breath, you’ll win her heart eventually. There’s nothing standing in your way…

Geez, those guys get on your nerves. You’re trying to run a kingdom and woo a princess, and they keep breaking into your castles and wreaking havoc. If you’re going to keep your crown, you’re going to have to fight for it and protect it with all you’ve got.

The place to start is with your wardrobe, since a king is only as good as his clothes. Might we suggest this Deluxe Bowser Costume for Adults? The yellow jumpsuit includes a stuffed tail sewn to the back and a hood with soft-sculpted snout and horns, along with appliqued eyes and hair. Wrist cuffs fasten with Hook and Loop fastener. The vinyl shell inflates with two mouth valves and comes with elastic shoulder straps. Now you'll be ready for whatever those two annoying plumbers throw at you!

£81.99
Item # DI85174 | Write A Review
Coming Soon
Sign Up To Be Notified When Your Size Is Available
Items Included
Product Highlights
Size Chart
XL
Inches Centimeters
Costume Sizing Tips
Product Description
Questions & Answers
There are no questions for this item yet. Be the first to ask a question!
Ask a Question
Reviews Write A Review