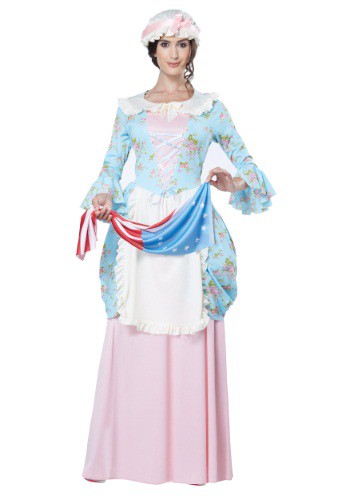 Living in colonial times would have been awesome. Our only worry would be what we might do for a job. The internet wasn't exactly a thing back then, which means we definitely wouldn't be selling costumes online. We aren't even sure that Halloween was a big thing back then, we don't think we'd be able to make money selling costumes. Which makes us wonder: What on Earth would we do?

We could become a blacksmith, that would be really cool. Or maybe a carpenter, building houses. Another interesting Idea would be joining the fight for American independence! We could either fight on the front lines or just work in camp. Either way, it'd be pretty cool to be able to say that we were there for one of the biggest moments ever in American history. Who knows, if we had been around during that time, maybe you'd be reading our name in the history books.

This costume feels like freedom. You'll be wearing a colonial style dress with an attached apron. The skirt of the dress is pink and will hang almost to the floor. The top of the dress is floral patterned and blue, with ruffled edging and lacing across the front. Last but not least, you'll be carrying an American Flag. The flag measures 20" by 27", and will be your own little keepsake of American freedom!

What event would you want to see if you were around in colonial times? Maybe you'd want to see the Boston Tea Party or George Washington crossing the Delaware River. You could even see the signing of the Declaration of Independence! With so many important pieces of history, it'd be really hard to choose just one. We would want to see every last second, and we are sure you would too!