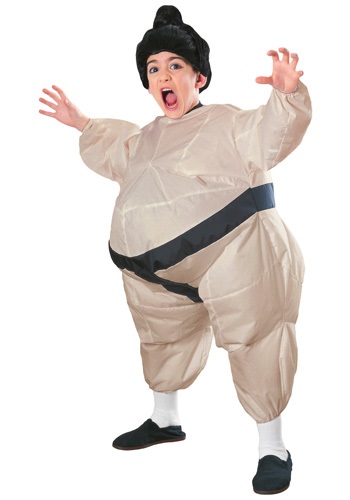 So, your child wants to be a sumo wrestler? That's pretty awesome, we're not going to lie. But putting on the mass necessary to hold yourself in the ring is no easy task... If only there was some way to take a shortcut, skip the mass gaining but still look huge... We got it! Why not check out this inflatable sumo costume?

They are going to look huge. They'll be in a big inflatable suit that will make it look like they might roll easier than walk. But don't be fooled, inside they will be quick and nimble as ever, ready to dodge on a dime to keep the edge on their sumo opponent. This tricky little costume could be the key to them winning their first sumo wrestling match and beginning a long and successful career! Isn't that what every parent dreams of?

This costume is destined to be a hit anywhere they go. It's simply too big to fail! (get it?) This costume is pretty simple, and that's why we love it. It's simply a jumpsuit and a fan! The jumpsuit has the black sash attached at the waist and has elastic around the arms and legs to help hold the air in. Then, the fan is turned on and it fills the whole suit up with air, making it fill up like a balloon! This is the easiest way to get this big, trust us!

This sumo costume is good for more than just their sumo wrestling career! It's a great costume too. This look is guaranteed to get a couple laughs at any costume event. Every move they make while wearing this looks incredibly weird and almost cartoon like! It's really quite a sight. You're going to have a lot of fun with this one!

£35.99
Item # RU38905 | Write A Review
Items Included
Product Highlights
Size Chart
ST
Inches Centimeters
Costume Sizing Tips
Product Description
Questions & Answers
There are no questions for this item yet. Be the first to ask a question!
Ask a Question
Reviews Write A Review