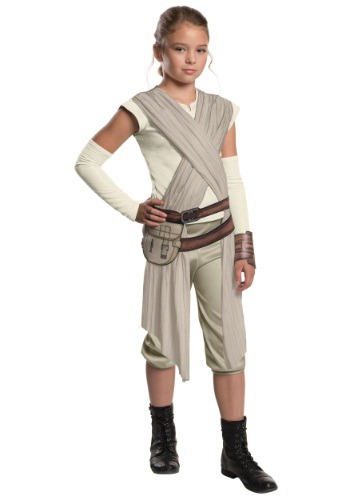 Isn't exciting that there are even more Star Wars movies coming out?

We have to admit, we were a little concerned after the prequel trilogy ended. Can you blame us? We were worried that might be the end of the amazing Star Wars films (although how amazing those prequels are, is open for debate). And then, lo and behold, out comes Episode 7 with smattering of new characters and some older well-loved ones. And now there's even more coming out? We're in Star Wars heaven.

We're particularly excited for some of the newer characters. Characters who we don't quite know yet. Characters that still have mysterious backgrounds; who knows where they'll end up?!

And, of course, one of our favorite new characters is Rey. She's smart and mechanically savvy, which makes her a total asset to the team. She's sassy and bold, doing whatever needs to be done. Rey's a survivor. Oh, and best yet? She can use the Force. Rey's a boss. An independent, stubborn, talented, boss of a human being.

If your kid is as excited as we are about Rey, then maybe they should take this opportunity to show off their excitement. Maybe collect posters and toys? Or better yet, dress up as her. No worries, we've made dressing up as their new favorite Star Wars character quite easy with this Deluxe Star Wars Episode 7 Rey Costume. It comes with a sleeveless top with crisscrossed scarves, cropped pants, arm warmers, and a foam belt and wrist cuff. Your kid will have all of Rey's signature look and not have to be abandoned on a desert planet or anything! ... to soon?