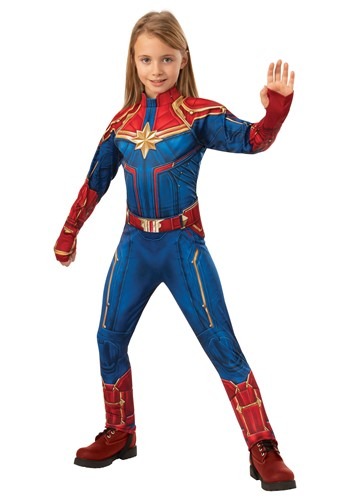 Carol Danvers is a big deal. She was an ace pilot for the U.S. Air Force. After she got some superpowers, she became the most powerful superhero in the galaxy. She served on Star Command as Star Commander's number one team member. Then, she went on to use her powers to protect Earth from dangerous aliens and we have the sneaking suspicion that she may be the key to defeating Thanos! She doesn’t mess around with the minor league stuff, because she a major player in the Marvel Cinematic Universe.

Is your girl ready to join the big leagues? Does she have the attitude and moral fiber of a superhero? Then maybe she’s ready to step into the shoes of Carol Danvers by wearing this Captain Marvel deluxe costume for kids!

This child Captain Marvel comes with everything your child needs (aside from cool Kree powers) to break into the superhero game. It comes with a dark blue jumpsuit that has printed armor details on it to recreate the look from the movie. The top has bright red accents and gold stripes. It even has a bright gold star in the center of the chest. It has fingerless gloves attached to the sleeves and elastic straps on the legs to fit into your child’s boots. Finally, the included mask recreates the look of the mask worn by Carol in the movie. It’s bright red with printed details and fits with an elastic band in back.

If your girl is destined for great things, like Carol Danvers, then maybe she’s ready to dress up as the might Captain Marvel. Maybe she can patrol the neighborhood for Skrull spies or head on adventures with the family cat, just like the real Carol Danvers. She could even lead a team of heroes against Thanos!

£30.99-£40.99*
Item # RU700597 | Write A Review
Sale - Save 25%
Items Included
Product Highlights
Size Chart
SMLXL
Inches Centimeters
Costume Sizing Tips
Product Description
Questions & Answers
There are no questions for this item yet. Be the first to ask a question!
Ask a Question
Reviews Write A Review