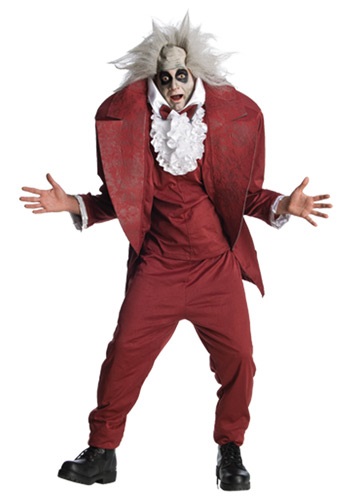 If you want to dress up like Beetlejuice for your next costume party, this is the perfect costume for you. It takes your whole ghostly persona to the next level, because you’re not just going as the Ghost with the Most… you’re going as the Ghost with the Most after he’s had his head shrunk (perhaps he took some advice and finally went to a head shrinker after all). This costume includes a tuxedo like Beetlejuice wore in the movie when he was trying to marry Lydia, along with Beelejuice’s—

Stop, stop, stop. Just please, stop. Look, it’s Beetlejuice here. The Ghost with the Most. In the flesh… well, kinda. You said my name three times, here I am, and have I got a bone to pick with you. That was the most boring, cheesy, awful description I’ve ever heard, and I’ve been stuck in a waiting room since before I could remember, listening to a herd of high school muscleheads rehashing the time they each individually scored the winning touchdown for the Qumquat Bowl or whatever. Where’s the pizazz? Where’s the wow factor? I am a superstar of the spirit world. We’re not talking C-list ghosts like those things that haunt that little girl’s TV or the latest thing getting sucked up by that bunch of dorks in New York. This is Beetlejuice you’re talking about. Show some respect.

You know what? Forget it. You’re fired. I don’t trust you to do my costume the justice it deserves. I’ll just do it myself. This Adult Shrunken Head Beetlejuice Costume is the most amazing Beetlejuice costume the world has ever seen. It’s got my burgundy suit jacket and pants set like the one I wore for my wedding (stylish then, stylish now, stylish forever). It’s got my pleated cuff and burgundy bowtie. It’s even got inflatable shoulder pads to bring back all the glamour of the ’80s you’d hoped you would forget. And let’s not forget the best part: the gray wig with attached flesh colored forehead, to make you look just like me (well, not quite that good) when that witch doctor shrunk my head (guy can’t take a joke). Go ahead. Buy the costume. Make your millennium. It’s show time!