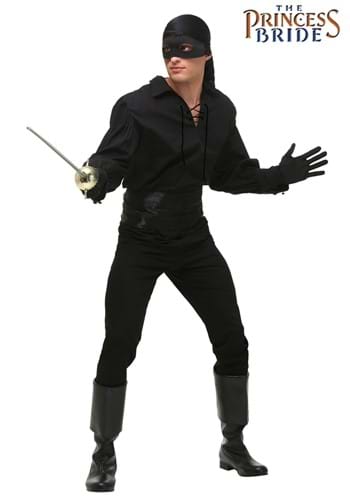 You know what we mean. On one hand, you have slobby, filthy sailors with bad teeth and a penchant for parrots, and on the other, you have suave, dashing young rogues that are quite the bucklers-of-swashes.

Not many fall into the second category, but there are a few. Pirates that are handsome, sly, perhaps a tad greedy, but excellent fighters and quick-quippers. And one of the most prominent figures in this category? The Dread Pirate Roberts, of course. Not only did he scale the Cliffs of Insanity, best a swordmaster, and out-wrestle a giant, this pirate out-smarted the dizzying intellect of one Vizzini, a Sicilian master-mind for hire. And he did it all for his true love.

So if you're considering being a pirate yourself, please do the world a favor and be the lovable roguish kind, like the Dread Pirate Roberts. As a matter of fact, why don't you just be him? You can look just like him at least, with our Princess Bride Westley Adult Costume. There's a v-neck shirt, black pants, black gloves, a head scarf, and black eye mask. It's officially licensed and will make you feel like the most dashing of pirates.

We admire the Dread Pirate more than we can say. For not only did he outsmart his enemies more than once, but he was also brave, cunning, and dapper as hell in his pirate outfit. Seriously. All black with a mask and sword? Can you say dashing? Cause that's what he was. Dashing. Now, just remember to bring your own iocane powder. Best not to trust a Sicilian's when death is on the line...